Joy on the Menu at Cafe in Asheville, NC

Posted on March 8, 2014 by heritagerecipebox

When winter storm Titan ominously blotted out the route my daughter and I recently planned on a road trip from Nashville to Boston, we detoured east into Asheville, North Carolina. Instead of glumly feeling stranded, we enjoyed exploring an artsy mountain town with restaurants that advertised burritos stuffed with tofu and a choice of quinoa or brown rice. I met another mother-daughter pair of travelers on their way to SXSW who chronicled their musical adventures in http://southbysteelcity.com/

Near our hotel, I spotted a sign for Laurey’s café. A few years ago, I interviewed owner Laurey Masterson for my book, A White House Garden Cookbook. The book focused on the first season of Michelle Obama’s garden and recipes from the White House, but I also asked chefs around the country about fun ways they encourage children to use garden-grown produce. Laurey told me how a lesson for local schoolchildren in how to make apple tarts took an interesting detour. As the tarts baked, she made a quick batch of pesto with the basil the kids brought from their school garden. “While they liked their tarts, they raved about the pesto,” she said. The children soon spread pesto on slices of fresh apples and devoured this impromptu snack. In a show of hands, the pesto won over the tarts as the favorite food of the outing.

I hoped to thank Laurey in person for contributing to my book, but I was sad to find out she passed away in February after a lengthy battle with cancer. She leaves behind her thriving cafe and shop, The Fresh Honey Cookbook (Storey Publishing, 2013), and the self-published memoir, Elsie’s Biscuits. Laurey’s parents ran the Blueberry Hill Inn in Goshen, Vermont, which is where Laurey grew up and learned how to cook with her mother, Elsie. 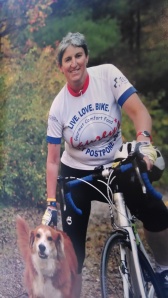 In one of my favorite chapters in the memoir, Laurey, a new arrival in Asheville, made a birthday dinner for her landlady. A guest found the food so impressive that she encouraged Laurey to start a restaurant. When Laurey brought a batch of freshly-baked Congo Bars as a sample product, the guest said they tasted like paste and sent her away. Laurey kept on baking and opened her café and catering business in 1990 – with Congo Bars on the menu to this day. I admire someone who didn’t let a negative comment deter her, and lived by the motto, “Don’t Postpone Joy.” These two recipes give a sense of Laurey’s personality. The inspiration for the Congo Bars comes from the Café Beaujolais cookbook (Ten Speed Press, 1984).

I am named after my great-grandmother, who only prepared two dishes, according to anyone who remembers. Somehow I ended up with a cooking gene that I brought with me from Richmond, Virginia to my current home in Boston, Massachusetts. I have worked as a journalist and published three cookbooks plus a memoir and a novel. This blog gives me a chance to share family recipes and other American recipes with a past.
View all posts by heritagerecipebox →
This entry was posted in cookbooks, Food, memoir and tagged Asheville, Congo bars, Laurey Masterson, North Carolina, pesto, White House garden, White House Garden Cookbook. Bookmark the permalink.

2 Responses to Joy on the Menu at Cafe in Asheville, NC