Posted on June 8, 2014 by heritagerecipebox 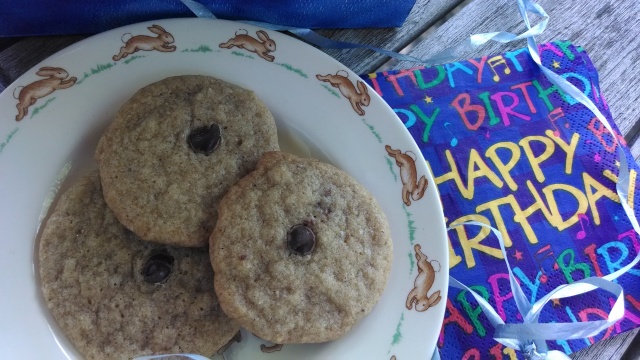 My grandmother, Hanna, launched a generation of young Richmonders by baking birthday cookies for them at the nursery school she directed. She topped each birthday boy or girl’s cookie with a Hershey’s chocolate kiss, making a special treat for a four or five year old. All the other cookies had just one chocolate chip on top. Before serving, she sat at the piano and played “Happy Birthday,” swiveling her neck around and smiling brightly to lead everyone in the sing-along.

The original recipe for the cookies comes from the Top Knot Nursery School, where she began her career in the 1930s. She never intended to teach, but she needed a job during the Great Depression. Since she could play the piano, she became the school’s music teacher. Eventually, she bought the business, renamed it Tuckahoe Nursery School, and ran it until she retired in 1970. For my daughter’s birthday this week, I pulled out this recipe – the only cookies I remember my grandmother ever baking. I cut the quantities in half from the school’s original (which made nearly 100), and added baking instructions. My daughter and her friends devoured them, proving that this recipe has withstood the test of time. 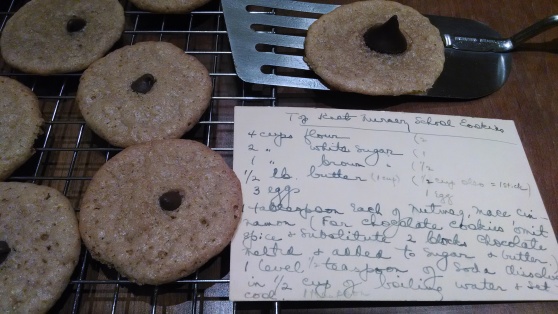 Variation: For chocolate cookies, omit the nutmeg, mace and cinnamon and add 1 ounce semi-sweet or bittersweet chocolate, melted, to the butter-sugar mixture.

I am named after my great-grandmother, who only prepared two dishes, according to anyone who remembers. Somehow I ended up with a cooking gene that I brought with me from Richmond, Virginia to my current home in Boston, Massachusetts. I have worked as a journalist and published three cookbooks plus a memoir and a novel. This blog gives me a chance to share family recipes and other American recipes with a past.
View all posts by heritagerecipebox →
This entry was posted in Food, History, memoir and tagged birthday, butter, chocolate chips, cinnamon, cookies, nutmeg, Richmond, Top Knot Nursery School, Tuckahoe Nursery School, Virginia. Bookmark the permalink.