Posted on July 21, 2015 by heritagerecipebox 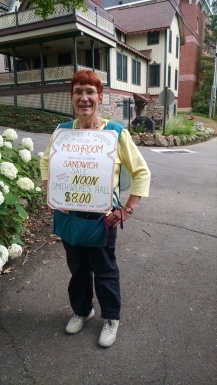 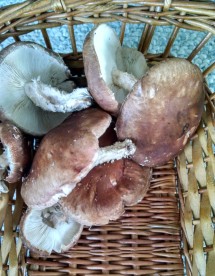 A grilled sandwich with cooked mushroom filling may not sound like a must-have lunch, but tradition always rules at the Chautauqua Institution, the arts and education center in western New York which started in 1874. These sandwiches, made by a group with the quaint-sounding name of Bird, Tree & Garden Club, have been made and sold as a fundraiser since 1965.

The Bird, Tree & Garden Club started in 1913 to study gardens, nature and the environment around Chautauqua. An early president was Mina Miller Edison, wife of inventor Thomas A. Edison and daughter of one of Chautauqua’s founders.

For the one-day sandwich sale, held every other summer, volunteers cook quarts of filling in advance. Wondra (a granulated form of flour that is lighter than regular all-purpose flour) holds the mushrooms together. On sale day, the crew toasts about 400 sandwiches in an hour. Never mind if the filling falls out the sides of the sandwich and butter drenches your fingers – continuing a tradition is most of the fun. The recipe comes from the Bird, Tree & Garden Club’s 2003 cookbook. 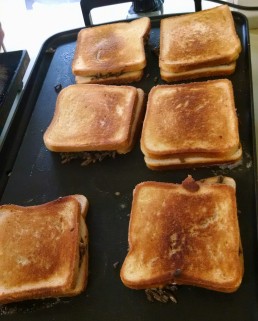 I am named after my great-grandmother, who only prepared two dishes, according to anyone who remembers. Somehow I ended up with a cooking gene that I brought with me from Richmond, Virginia to my current home in Boston, Massachusetts. I have worked as a journalist and published three cookbooks plus a memoir and a novel. This blog gives me a chance to share family recipes and other American recipes with a past.
View all posts by heritagerecipebox →
This entry was posted in cookbooks, Food, history and tagged 1960s, Chautauqua, Mina Edison, mushroom, New York, sandwich, Thomas Edison. Bookmark the permalink.

1 Response to One hour, 400 Mushroom Sandwiches