A Cocktail From the 50th State

Posted on June 27, 2016 by heritagerecipebox 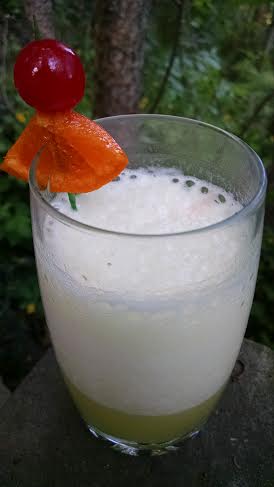 Hawaii, coveted for its sugar plantations and its strategic location in the Pacific, didn’t become the 50th of the United States until 1959. Just six years later, history does not creep into Vincent and Mary Price’s A Treasury of Great Recipes (1965). They write that Maui, “not yet invaded by tourists,” is “an island paradise where the bounties of nature hang within easy reach, or if you’re too lazy to reach for them, a sloe-eyed siren awaits your slightest wish.” Apparently they were also far removed from 1960s feminist consciousness-raising!

At the deluxe Hotel Hana Maui, the Prices could be found drinking this rum punch while they waited for a festive luau to begin. The drink turns out a bit like a pina colada without the icky sweetened coconut. The top songs for 1965? “Wooly Bully” by Sam The Sham and The Pharaohs, and “I Can’t Help Myself  (Sugar Pie Honey Bunch)” by the Four Tops. Maybe the Prices listened while they sipped.
Hanaho (come again!) Rum Punch (1965)
Serves 1

I am named after my great-grandmother, who only prepared two dishes, according to anyone who remembers. Somehow I ended up with a cooking gene that I brought with me from Richmond, Virginia to my current home in Boston, Massachusetts. I have worked as a journalist and published three cookbooks plus a memoir and a novel. This blog gives me a chance to share family recipes and other American recipes with a past.
View all posts by heritagerecipebox →
This entry was posted in cocktails, cookbooks, Food, history, History and tagged 1960s, A Treasury of Great Recipes, Hawaii, Mary Price, Maui, pineapple juice, rum, Vincent Price. Bookmark the permalink.

2 Responses to A Cocktail From the 50th State