Martini of the Stars

Posted on July 23, 2017 by heritagerecipebox 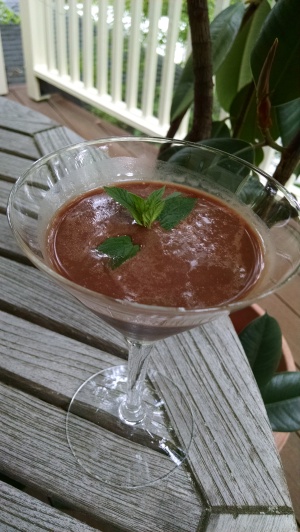 National Day of the Cowboy, this year on July 22, conjures up images of campfires and beans, but Recipes4Rebels gives the day a more interesting spin. This blog celebrates actor James Dean and the recipes that he and his coterie of “Hollywood cowboys” made during Dean’s short life (1931-1955), and marks National Day of the Cowboy by inviting fans to make and post their cowboy-themed (broadly defined) recipes.

My entry to Cowboy Day Cook-Along 2 tweaks the “Giant Martini” concocted by Liz Taylor and Rock Hudson during five weeks of shooting the movie “Giant” with Dean on location in Marfa, Texas. Just 60 miles from the Mexican border, Marfa is probably best known as the haven for visual artist Donald Judd, who arrived in the 1980s to create giant outdoor sculptures. In 1955, when “Giant” was being filmed, Taylor wrote about the “oppressive” heat, humidity and dust. Apparently, this chocolate martini took the edge off. 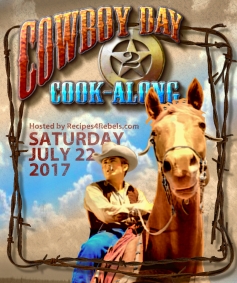 The original recipe on Recipes4Rebels calls for Kahlua and Hershey’s syrup, but I changed it up with Frangelico and Ghiradelli syrup. Since when did Liz Taylor ever stray from an upgrade to something more luxurious?

I also decided to use mint as a garnish – probably not something that grows in Marfa in July, but a nice contrast in color and an additional pop in flavor. Below is my adaptation to this refreshing, if sweet, antidote to a hot day.

Combine the vodka, Frangelico and chocolate syrup in a cocktail shaker. Fill with ice. Shake until very cold. Strain into a chilled martini glass. Garnish with a mint sprig.

I am named after my great-grandmother, who only prepared two dishes, according to anyone who remembers. Somehow I ended up with a cooking gene that I brought with me from Richmond, Virginia to my current home in Boston, Massachusetts. I have worked as a journalist and published three cookbooks plus a memoir and a novel. This blog gives me a chance to share family recipes and other American recipes with a past.
View all posts by heritagerecipebox →
This entry was posted in cocktails, Food, history, History and tagged 1950s, chocolate, cocktail, Cowboy Day Cook-Along, Hollywood, James Dean, Liz Taylor, Marfa, martini, National Day of the Cowboy, recipes4rebels, Rock Hudson, Texas, vodka. Bookmark the permalink.

1 Response to Martini of the Stars