Gardening in a Time of War

Posted on October 1, 2018 by heritagerecipebox 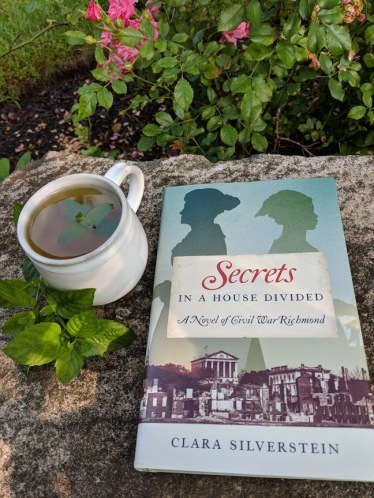 You won’t find too many sumptuous meals in Richmond, the capital of the Confederacy in the Civil War. You will find two women gardening to supplement their meager larder in Secrets in a House Divided, the historical  novel I just published with Mercer University Press. The relationship between the women – one enslaved, the other her owner – becomes increasingly complicated as the Union army threatens to engulf the city. Peppermint tea, brewed from fresh leaves, is their go-to beverage. The Book Club Cookbook tells you more about the foods that the characters eat. I’ll be blogging about historic recipes again as soon as I have more time. Stay tuned!

I am named after my great-grandmother, who only prepared two dishes, according to anyone who remembers. Somehow I ended up with a cooking gene that I brought with me from Richmond, Virginia to my current home in Boston, Massachusetts. I have worked as a journalist and published three cookbooks plus a memoir and a novel. This blog gives me a chance to share family recipes and other American recipes with a past.
View all posts by heritagerecipebox →
This entry was posted in Food, history, History and tagged Civil War, historical novel, novel, peppermint, Richmond, tea, Virginia. Bookmark the permalink.

1 Response to Gardening in a Time of War