Posted on April 19, 2014 by heritagerecipebox

The daffodils have just emerged and so have the rhubarb leaves in my back yard. Since the stalks are still too small to harvest, I cheated and bought a few from the supermarket. Then I tried to find a family recipe. Nothing! Rhubarb does grow in Virginia and West Virginia, but I suspect nobody liked its stringy sourness.

Rhubarb, a member of the buckwheat family, actually originated in China, where it was used as a medicine. Cultivation spread into Europe, and rhubarb became all the rage in England when Queen Victoria’s coronation in 1837 inspired a commemorative variety known as Victoria rhubarb. A Maine gardener imported rhubarb to the U.S. sometime around 1800 and introduced it to growers in Massachusetts, according to The Rhubarb Compendium, an on-line resource for all things rhubarb. Maybe that explains why rhubarb pie often heralds spring in New England and why rhubarb is often called the “pie plant.”

Since making pie seemed like too much work this week, I adapted a sauce from a pamphlet from Indiana titled Old Fashioned Bread Puddings by adding orange juice and fresh ginger to a basic recipe. The sauce would certainly go well with bread pudding, ice cream, or even plain yogurt. I simply ate it plain as an astringent chaser to all my carbs! 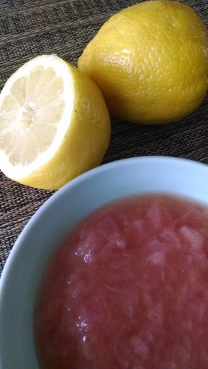 I am named after my great-grandmother, who only prepared two dishes, according to anyone who remembers. Somehow I ended up with a cooking gene that I brought with me from Richmond, Virginia to my current home in Boston, Massachusetts. I have worked as a journalist and published three cookbooks plus a memoir and a novel. This blog gives me a chance to share family recipes and other American recipes with a past.
View all posts by heritagerecipebox →
This entry was posted in cookbooks, Food, History and tagged ginger, lemon, New England, Queen Victoria, rhubarb, sauce. Bookmark the permalink.