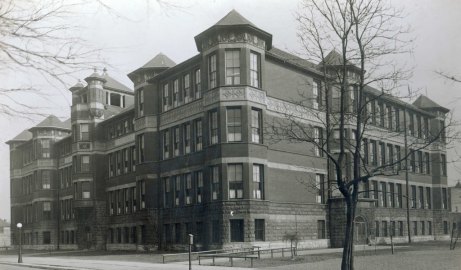 The elementary school I attended in Chicago in the 1960s is within walking distance of the home where Barack and Michelle Obama lived before they moved to the White House. My parents used to take me for ice cream at Baskin-Robbins, the site of their first date, now commemorated with a plaque described in the Chicago Tribune. I still remember how to walk to the William H. Ray School. From my house, I turned left, passed the Hyde Park Neighborhood Club and Wolf’s toy store; then crossed East 55th Street with a “police lady” who wore a shiny cap, blue skirt, and white gloves.

Ice skating with a friend in Hyde Park

Hyde Park, one of the few racially mixed neighborhoods in the U.S. at the time, attracted families from all over the country and all over the world. That gave the menu at the Ray School’s Parent-Teacher Association’s annual international dinner amazing variety at a time when Tang and Velveeta dominated many pantries. The 36 families who contributed recipes represented France, Italy, Switzerland, Armenia, the Philippines, and Japan. The American entries? True to the time period, the BOMB (beans, onion, mustard and bacon) sandwich, and Bronx Bavarian Cream (ice cream Jell-O mold).

My mother helped collate and staple the collection, and managed to save it long enough for me to list the recipes on our Ray School Facebook page. The one that I made, Msa-a-a, makes an interesting variation on two dishes that I never ate back then: baba ganoush and chickpea salad. With rice, it’s a light vegetarian meal; with crackers or pita bread, a snack. The school demonstrated a concept that we never talked about back then, either: diversity. This gave me the right start.

I am named after my great-grandmother, who only prepared two dishes, according to anyone who remembers. Somehow I ended up with a cooking gene that I brought with me from Richmond, Virginia to my current home in Boston, Massachusetts. I have worked as a journalist and published three cookbooks plus a memoir and a novel. This blog gives me a chance to share family recipes and other American recipes with a past.
View all posts by heritagerecipebox →
This entry was posted in cookbooks, Food, History, memoir and tagged Barack Obama, Baskin-Robbins, Chicago, Chicago Public Schools, Chickpea, Eggplant, Hyde Park, Michelle Obama, Ray School, Stew. Bookmark the permalink.

1 Response to Eggplant Stew from My School’s International Dinner