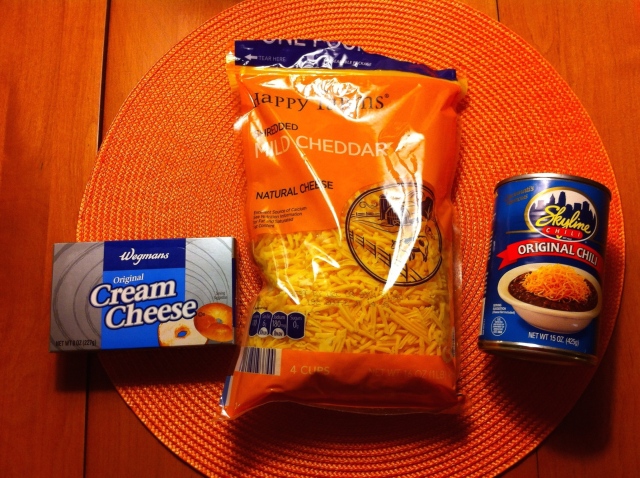 Hello historic recipe enthusiasts! I’m Nicole, and I’ve had the pleasure of working for Clara this summer in the Chautauqua Writers’ Center. Last week, the two of us attended Brian Castner‘s workshop on “The Modern Author’s Blog,” and I’m thrilled to share a recipe that’s near and dear to my heart: Cincinnati Chili Cheese Dip! As a graduate student, I’m all about inexpensive, tasty, and easy-to-make food, and this dip makes for a great appetizer and conversation starter. 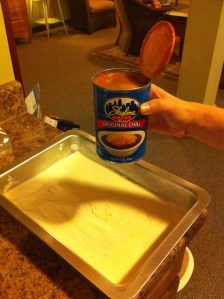 Special thanks to Cindy for helping spread the cream cheese!

The most important part of this dish is, of course, Cincinnati chili. For those not familiar with the regional delicacy, it consists of finely ground beef, cinnamon, chocolate, and secret-recipe spices. Unlike the majority of American chili, Cincinnati chili is very rarely eaten plain or just with crackers– it’s usually served over spaghetti and topped with cheese to make a “three-way.” Adding onions and beans turns the dish into a “four-” and “five-way,” respectively. Cheese coneys are also popular chili parlor fare– hot dogs covered with Cincinnati chili and piled high with thinly shredded cheese. Without even looking at a map, I can think of three chili parlors in the northern Kentucky town where I grew up, which only has a population of 8,000 people. I have claimed “three-ways” as my favorite food for most of my life. 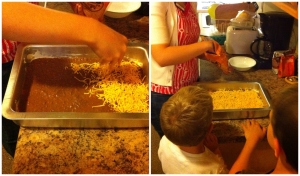 My father grew up in Dayton, KY, another small town, but further north, just across the river from Cincinnati. He sometimes tells stories about how my grandfather, the long-time police chief, used to stake out chili parlors to find out information and whereabouts of criminals. My parents have a black and white photograph of him in his police uniform in our living room. It’s easy for me to imagine him sitting on a red plastic stool, enjoying a meal, eavesdropping, and trying to avoid splashing chili on his white shirt. My grandfather passed away before I was born, but I like to think of chili as a little connection to him and the town that he served for over forty years. 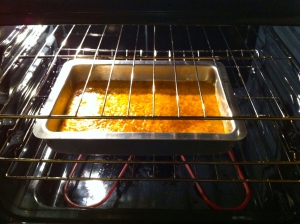 This chili cheese dip recipe is a more recent take on the tradition of Cincinnati chili that isn’t served in parlors, but it’s simple and tasty. Cincinnatians prefer to prepare it for football parties, where they can eat it and groan at the latest Bengals bungle in the privacy of their own homes. (I kid, I kid.) If you go to a football party in Cincinnati and no one has thought to bring chili cheese dip, there are probably more Steelers fans than Bengals fans in the room. (And here’s how you should feel about that.) 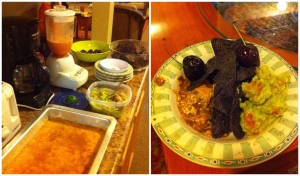 The finished smorgasbord, including guacamole, cherries, and peach fuzzies.

Sharing this recipe with my friends at Chautauqua was a wonderful way to bring a little bit of Cincinnati to upstate New York. People who haven’t grown up eating the chili have all sorts of reactions, from curiosity to disgust and everything in between. Everyone who tried it here seemed to like it, but I made plenty of guacamole just in case they thought it was too strange!