A Swedish “Hot Dish” from a Church Basement

Posted on August 29, 2014 by heritagerecipebox 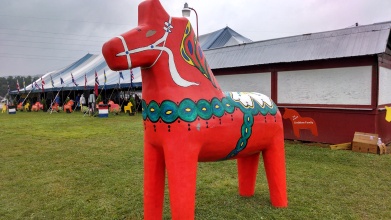 Shelves of lingonberry jam and Wasa crackers at the markets near my summer job reflect the large Swedish community that settled in Jamestown, New York starting in the 1840s. By 1930, approximately 70 percent of the residents in Jamestown had Swedish ancestry, according to a report from the Chautauqua County Historical Society.  Many of the early immigrants were woodworkers in the city’s furniture factories.

Every summer, a local Scandinavian Festival pays homage to this heritage by celebrating all things Swedish, from the Vikings to Dala horses. After clumsily painting a wooden chicken, I tramped through a field of puddles to the food tent, where I feasted on home-made Swedish meat balls (spicier and less rubbery than those at Ikea), potatoes mashed with rutabagas, cucumber salad with dill, and a mouth-puckeringly sour assortment of currants and other fresh berries with plain yogurt.

Many of the cookbooks for sale in another tent offered tempting glimpses of traditional recipes such as cardamom rolls and rice pudding, but I was much more intrigued by Lutheran Church Basement Women: Lutefisk, Lefse, Lunch and Jell-O. This collection by Janet Letnes Martin and Allen Todnem (1992) comes from Redbird Productions in Hastings, Minnesota. The church wisely goes unnamed, as many recipes are introduced with humorous poems. Fruit cakes are “Forsaken and lonely, they turn stale and old / They sit on a shelf till they dry up and mold”). Jell-O is introduced with, “Let’s give a cheer for that American treat / That all Scandinavians soon learn to eat…This is a salad, not a main dish / Watch so it won’t melt into the fish.”

Somewhat intimidated about what to make, I chose a Six Layer casserole from the chapter on “Hot Dishes,” as it looked like promising potluck fare. I should have used a deeper dish than a 9-by-13-by-2 inch standard baking pan, as the ingredients didn’t really pile into layers. I persevered through my somewhat deconstructed layers and decided to add chopped fresh dill for more flavor. The meatballs browned too much on top, but everyone liked the colorful mixture of potatoes and vegetables underneath. Next time, maybe I’ll tackle Lefse (pancakes made with finely mashed potatoes) or Company Jell-O (a red color with bananas sliced into it). For Lutefisk, dried cod which has to be soaked in lye and then boned and boiled, I’ll wait for the next festival! 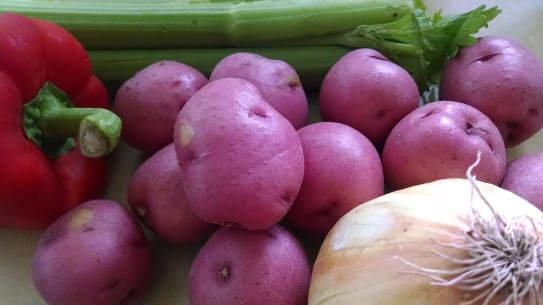 Note from the book: If you skip the green peppers, which are optional, you only have a 5 layer hot dish but Lutheran Church Basement Women still call it Six Layer Hot Dish.

I am named after my great-grandmother, who only prepared two dishes, according to anyone who remembers. Somehow I ended up with a cooking gene that I brought with me from Richmond, Virginia to my current home in Boston, Massachusetts. I have worked as a journalist and published three cookbooks plus a memoir and a novel. This blog gives me a chance to share family recipes and other American recipes with a past.
View all posts by heritagerecipebox →
This entry was posted in cookbooks, Food, History and tagged celery, hot dish, Jamestown, Lutheran, meatballs, New York, onion, potato, Scandinavian, Swedish. Bookmark the permalink.