Potato Soup with a ‘Teacupful’ of Rice

Posted on January 27, 2015 by heritagerecipebox

Call this Civil War Potato Soup comfort food from the 1860s. Thickened with rice as well as bread, the recipe from Godey’s Lady’s Book puts a triple helping of starch in a bowl. It promises nothing fancy and delivers nothing but soothing warmth. The magazine described it as “a savory and cheap soup, very common in France and Germany.” 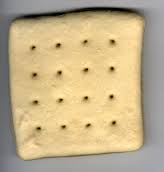 Almost everyone needed comfort of some kind during the war. My grandmother’s North Carolina family once hid a pot of soup in the back of their closet so soldiers marching through wouldn’t commandeer their dinner, an all too common practice for hungry men from both sides. As the war dragged on, ripped-up railroad tracks could no longer carry food supplies. Soldiers from the Union marched with hardtack for rations. They nicknamed this kind of cracker “tooth dullers” and “sheet iron” because it was so stiff. A Boston-area company, G.H. Bent, still makes hardtack for re-enactors and history museums. 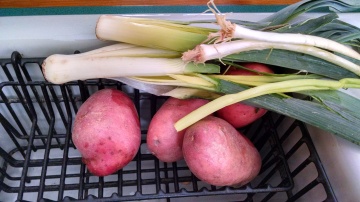 This soup needs no hardtack or any other cracker, but a parsley garnish livens it up. I rewrote the directions below (original language in quotes) from Civil War Recipes from Godey’s Lady’s Book, compiled and edited by Lily May Spaulding and John Spaulding. The magazine’s long-time editor, Sarah Josepha Hale, tirelessly advocated for a national Thanksgiving holiday until President Abraham Lincoln proclaimed the first Thanksgiving in 1863, even in the midst of the Civil War.

6 cups water
3-4 potatoes, peeled and cut into approximately 1/2 inch pieces
1 slice bread, preferably with a thick crust
6-8 leeks, white part only, sliced thin [I used a mix of leeks and scallions because that’s what I had in my vegetable drawer]
1/2 cup white rice
Salt and pepper, to taste

1. In a large pot, bring the water to a boil. Add the potatoes, bread and leeks.
2. Cover the pot and return the water to “a brisk boil.”
3. “Throw in a teacupful (not a breakfast cup) of rice, then a spoonful of salt and half that of pepper.” [In other words, add the rice, salt and pepper].
4. Cover the pot again and simmer over low heat for 1 hour, or until all the ingredients “amalgamate” (blend together). Press any potato chunks against the pot with the back of a spoon, or if you want to be more modern, use a blender or an immersion blender to puree the soup. Garnish with parsley if you like.

I am named after my great-grandmother, who only prepared two dishes, according to anyone who remembers. Somehow I ended up with a cooking gene that I brought with me from Richmond, Virginia to my current home in Boston, Massachusetts. I have worked as a journalist and published three cookbooks plus a memoir and a novel. This blog gives me a chance to share family recipes and other American recipes with a past.
View all posts by heritagerecipebox →
This entry was posted in cookbooks, Food, history, memoir and tagged 1860s, Civil War, Godey's Lady's Book, hardtack, leeks, North Carolina, potato soup, rice, Sarah Josepha Hale, soup. Bookmark the permalink.

3 Responses to Potato Soup with a ‘Teacupful’ of Rice