In My March Kitchen

Posted on March 8, 2015 by heritagerecipebox 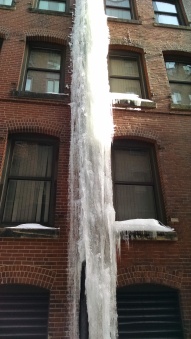 Never mind these icicles I passed while walking to work and the snowiest February in Boston history. Spring arrives March 20 and I’m beyond ready! In the meantime, I’ve been reading recipes for inspiration – and looking at the monthly IMK posts hosted by Celia at figjamandlimecordial.

I found a new trove of my grandmother’s hand-written recipes, tucked into a Royal Baking Powder cookbook. Gelatine salads, here I come!

But I started with her version of cinnamon and clove-spiced applesauce bread.

I also plan to make a few 1960s recipes to prepare for Mad Men’s final season, which begins April 5.

In the meantime, I’m picking fresh rosemary that I grow on my windowsill and putting it into everything I can think of, including martinis. Anything for a little green! I’ll be watching for the crocuses to poke up from the snow. 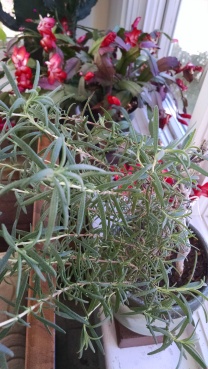 I am named after my great-grandmother, who only prepared two dishes, according to anyone who remembers. Somehow I ended up with a cooking gene that I brought with me from Richmond, Virginia to my current home in Boston, Massachusetts. I have worked as a journalist and published three cookbooks plus a memoir and a novel. This blog gives me a chance to share family recipes and other American recipes with a past.
View all posts by heritagerecipebox →
This entry was posted in cookbooks, Food, history, memoir and tagged 1930s, 1960s, applesauce bread, Mad Men. Bookmark the permalink.

7 Responses to In My March Kitchen