Posted on November 20, 2016 by heritagerecipebox 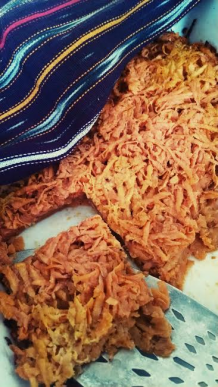 Thanksgiving became an official holiday in 1863 during Abraham Lincoln’s administration, and most U.S. Presidents have put sweet potatoes on their holiday tables ever since. It’s too soon to say what Donald Trump will serve when he occupies the White House, but you can try the Obamas’ sweet potato recipe from my Boston Globe article. The recipe below, attributed to Teddy Roosevelt, comes from The Presidents’ Own White House Cookbook (Culinary Arts Institute, Chicago, 1968). Apparently, Roosevelt was so fond of sweet potatoes that people sometimes called them “Roosevelt potatoes.”

I adapted the Roosevelt original recipe calling for six potatoes. Once you grate the potatoes and put them in a baking dish, there’s little more to do. The book also gives Herbert Hoover’s sweet potato recipe, made with cream, walnuts, and marshmallows. I prefer the healthy, unadorned Roosevelt version – rough and ready for all the other components of Thanksgiving.

I am named after my great-grandmother, who only prepared two dishes, according to anyone who remembers. Somehow I ended up with a cooking gene that I brought with me from Richmond, Virginia to my current home in Boston, Massachusetts. I have worked as a journalist and published three cookbooks plus a memoir and a novel. This blog gives me a chance to share family recipes and other American recipes with a past.
View all posts by heritagerecipebox →
This entry was posted in cookbooks, Food, history, History and tagged Barack Obama, Herbert Hoover, sweet potato, Thanksgiving, Theodore Roosevelt, U.S. Presidents. Bookmark the permalink.