German Gingerbread from the Family

Posted on December 15, 2016 by heritagerecipebox 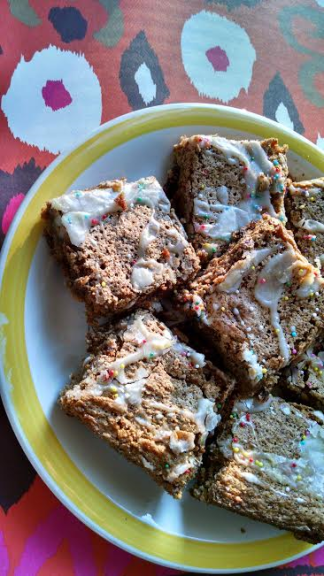 It’s been more than 100 years since my German ancestors arrived in the United States but traces of the Old Country remain in our recipe boxes. This recipe for lebkuchen, a German gingerbread, appears on two different cards in two different styles of handwriting, indicating that more than one person liked to make it! I remember my sister patiently snipping up raisins for the recipe each December.

The German version of lebkuchen (also called pfefferkuchen) goes back to medieval times. The spices had to be imported, so larger cities with strong trade ties had an advantage. My family must have discovered lebkuchen near Ulm, where they lived for many generations. In Nuremberg, the cookies became so popular that a guild of lebkuchen bakers formed in the 1600s.

My family’s version of lebkuchen has the texture of brownies with the complex flavor of a spice cookie, and no ginger whatsoever. Who knows whether it’s authentically German but it does qualify as a favorite taste of my past.

Place the sugar in a bowl. Mix in the lemon juice and lemon zest. Add hot water by the teaspoonful until the glaze is thin enough to drizzle across the top of the bars. Sprinkle with decorative sugar “pills” when the glaze is still warm if you want even more decoration.

I am named after my great-grandmother, who only prepared two dishes, according to anyone who remembers. Somehow I ended up with a cooking gene that I brought with me from Richmond, Virginia to my current home in Boston, Massachusetts. I have worked as a journalist and published three cookbooks plus a memoir and a novel. This blog gives me a chance to share family recipes and other American recipes with a past.
View all posts by heritagerecipebox →
This entry was posted in Food, history, History, memoir and tagged 1930s, allspice, cinnamon, cloves, Germany, gingergread, lebkuchen, Ulm. Bookmark the permalink.

2 Responses to German Gingerbread from the Family

The Most Trusted Name In Fake News