Blueberry Cake from the Land of the Pilgrims

Posted on July 28, 2014 by heritagerecipebox

Americans always think of the Pilgrims at Thanksgiving, but the first English settlers in Plymouth, Massachusetts ate a far more extensive diet than cranberry sauce and turkey. The Plimoth Colony Cook Book, published in 1957 by the Plymouth Antiquarian Society, explains exactly how the Pilgrims sustained themselves after their legendary Mayflower ship landed in December, 1620. By the summer of 1621, they were gathering fruit from the woods and meadows near Plymouth Bay. Some went into the recipe for blueberry cake that I tried.

On the Mayflower, the Pilgrims brought provisions including oatmeal, dried peas, prunes, raisins, bacon, salt pork, turnips, cabbage, onions, and parsnips. Once these ran out, Native Americans showed them hunting, fishing, and planting methods. To get through their first winter, and the years that followed, the settlers adapted English recipes to American ingredients. Corn and cranberries, two crops not grown in Europe, soon proved extremely useful.

The settlers found wild blueberries for their cakes, though William Wood wrote of a wider assortment of berries in New England’s Prospect in 1634. “There is gooseberries, bilberries, treakleberries, hustleberries, and currants, which being dried in the sun are a little inferior to those that our grocers sell in England.” So much for an accommodating attitude! Identification for treakleberries, bilberries, and hustleberries may be lost to history, but the good folks at the Plymouth Antiquarian Society did adapt this cake recipe to modern ovens and cooking methods. The sturdy but still tender cake keeps the berries from sinking to the bottom. I cut the cake into squares so I could admire the contrast between the golden cake and purplish berries. 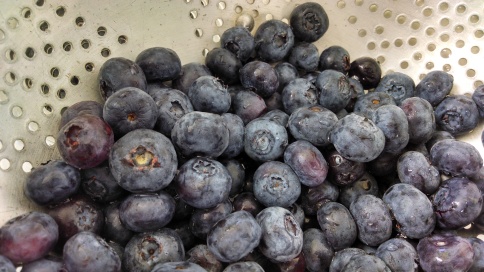 I am named after my great-grandmother, who only prepared two dishes, according to anyone who remembers. Somehow I ended up with a cooking gene that I brought with me from Richmond, Virginia to my current home in Boston, Massachusetts. I have worked as a journalist and published three cookbooks plus a memoir and a novel. This blog gives me a chance to share family recipes and other American recipes with a past.
View all posts by heritagerecipebox →
This entry was posted in cookbooks, Food, History and tagged berries, blueberry, cake, Massachusetts, Mayflower, Pilgrims, Plimoth Plantation, Plymouth. Bookmark the permalink.