Beef Stew from a $4 Crock-Pot and 50 Cent Cookbook

Posted on July 17, 2014 by heritagerecipebox 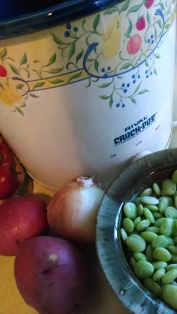 Decorated with a fruit-and-flower motif in a yellow border, the Crock-Pot on the yard sale table looked straight out of the 1970s, when this kitchen appliance first hit the market. I wondered if it would work, but the price was right at $4, so I took it home, plugged it in, and eventually made a batch of Hungarian beef stew.

According to the official Crock-Pot web site, this appliance started as a bean cooker but its uses expanded. Now people call it a slow cooker and the stainless steel sides make it look much sleeker. The newest models even connect with your smart phone so you can turn them on remotely.

A flea market yielded a 50-cent companion to my yard sale bargain: the Rival brand Crock-Pot Cooking book, published in 1975. “Cooks all day with the cook’s away” the blurb on the back cover promised. Since my summer job keeps me busy at odd hours, I liked that retro idea.

Though beef stew hardly seems like summer fare, I wanted something hearty for a pot luck, and the Crock-Pot doesn’t heat up the kitchen the way an oven would. Best of all, I put together my ingredients  before I went to bed and woke up with a meal ready for later that day. A seasonal bonus: the red pepper and parsley came from local farms. I substituted beer for beef broth, which may seem weird, but the recipe only needed half a cup of liquid and I was in no mood to go out to the store at midnight to look for one missing ingredient. Red wine or even water would have worked fine, too. When I was cooking, I found a Classic Rock radio station blaring Led Zeppelin, Cheap Trick and Aerosmith to enhance the 1970s theme. Fortunately, my cooking skills have improved since the first time I listened, when all I knew how to make was brownies from a mix or scrambled eggs.

I am named after my great-grandmother, who only prepared two dishes, according to anyone who remembers. Somehow I ended up with a cooking gene that I brought with me from Richmond, Virginia to my current home in Boston, Massachusetts. I have worked as a journalist and published three cookbooks plus a memoir and a novel. This blog gives me a chance to share family recipes and other American recipes with a past.
View all posts by heritagerecipebox →
This entry was posted in cookbooks, Food, History, memoir and tagged 1970s, beef, beef stew, beer, Crock Pot, Hungarian, lima beans, paprika, red pepper, slow cooker, Stew. Bookmark the permalink.