A Beginner Attempts a Prize-Winning Pie

Posted on October 12, 2014 by heritagerecipebox 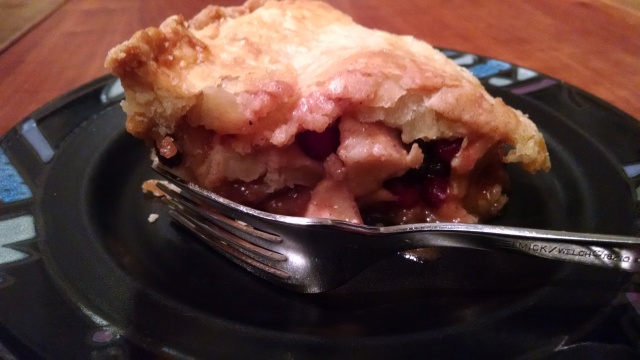 Embarrassing to admit, I never baked an entire apple pie before this weekend. How un-American! When I was a newspaper reporter, I once watched, enthralled, as experienced bakers rolled dough and cut apples for a contest at the Salem Cross Inn near Sturbridge, Massachusetts. But my grandmothers, who were supposed to tie on white aprons and teach me, never baked pies. Neither did my mother. My previous attempts at crust ended up a crumbly or sticky mess, so I always gave up before it came time for the easy part – the filling.

It’s high time I learned this ancient art. The practice of baking food on top of some kind of dough dates back to the first civilizations in Greece, Mesopotamia, Egypt, and Arabia, according to the foodtimeline. Fruit pie as we know it first appeared in the early 19th century.

The pressure is on to practice now. In a little more than a month, I am stepping into the role of the designated Thanksgiving pie baker. For inspiration, I found a booklet of 1990 apple pie prize winners from the Topsfield Fair, an annual October event north of Boston. Since the first prize filling was published without a crust recipe, I chose the second prize crust. It seemed simpler than the runners-up, which called for blending Crisco (ugh) and butter, then adding ice water a little at a time to reach the right consistency. As if I would know!

I struggled and sweated, but I managed to fill a pie plate with a bottom crust, a filling, and a top crust. I can’t say this pie would win any beauty contests, but the filling turned into a colorful, caramelized mix of apples, cranberries, and brandy-soaked raisins. It did bubble out of the crust and make a mess in the oven, but next time, I will place a baking sheet underneath the dish. The friends who tried it asked for the recipe, so I know it’s a winner!

Crust (prepare one at a time):

I am named after my great-grandmother, who only prepared two dishes, according to anyone who remembers. Somehow I ended up with a cooking gene that I brought with me from Richmond, Virginia to my current home in Boston, Massachusetts. I have worked as a journalist and published three cookbooks plus a memoir and a novel. This blog gives me a chance to share family recipes and other American recipes with a past.
View all posts by heritagerecipebox →
This entry was posted in cookbooks, Food, History, memoir and tagged apple pie, apples, brandy, butter, cranberries, crust, currants, grandmother, Massachusetts, orange zest, raisins, Salem Cross Inn, Topsfield Fair. Bookmark the permalink.