Spring Soup from France – and Chicago!

Posted on May 6, 2017 by heritagerecipebox 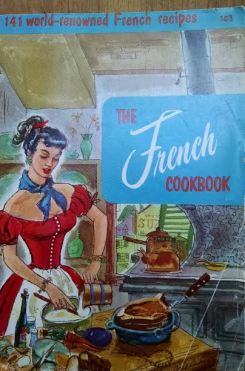 When it comes to translating French cooking for American cooks, Julia Child still reigns as the grande dame. She made her first television appearance simply to publicize her book, Mastering the Art of French Cooking, at Boston’s WGBH in 1961 – and quite unexpectedly built a TV cooking career. Before then, Americans learned about French cooking from books such as The French Cookbook by the Culinary Arts Institute in Chicago (1955) [See more historic Culinary Arts Institute recipes here]. Illustrated with drawings of French people in rustic costumes, the book assumes French cooking is exotic. The introduction encourages readers to try the unfamiliar concept of using wine in their cooking because “a food cooked in wine doesn’t necessarily taste like wine.” Clearly, American tastes have evolved since then!

So what French food did Americans learn to make in the 1950s? Complicated sounding canapés, beef Burgundy, cream puffs, and crepes. Green Pea Soup (Potage Saint-Germain) sounded more appealing – and seasonal. I adapted it to make it even easier and lighter. Would a real French chef serve my version? Probably not. But its contrasting shades of green made a colorful and welcome spring appetizer.

Here’s the rest of the original recipe:

I am named after my great-grandmother, who only prepared two dishes, according to anyone who remembers. Somehow I ended up with a cooking gene that I brought with me from Richmond, Virginia to my current home in Boston, Massachusetts. I have worked as a journalist and published three cookbooks plus a memoir and a novel. This blog gives me a chance to share family recipes and other American recipes with a past.
View all posts by heritagerecipebox →
This entry was posted in cookbooks, Food, history, History and tagged 1950s, Chicago, Culinary Arts Institute, France, French, Illinois, Julia Child, lettuce, Mastering the Art of French Cooking, Peas, soup, WGBH. Bookmark the permalink.