Posted on June 29, 2015 by heritagerecipebox

The upcoming July 4 holiday inspired me to look back at recipes from U.S. Presidents for alternatives to unimaginative menus of hot dogs, hamburgers and potato salad. Many presidential libraries post recipes on their web sites, but I found a good source in the “Favorite Dishes of the Presidents” chapter in Capitol Hill Cooks, by Linda Bauer (Taylor Trader Publishing, 2010). The Texas-based author started publishing recipes from U.S. Presidents and members of Congress in the American Sampler Cookbook during Ronald Reagan’s second term. Capitol Hill Cooks benefits Homes for Our Troops, which provides specially designed homes to injured veterans.

This recipe from Rutherford B. Hayes, our 19th President (1877-1881) gave me something to do with corn besides eating it off the cob. I also couldn’t resist the chance to stick an onion with whole cloves and plop it into the soup pot. Hayes, from Ohio, served in the Civil War before being elected President in a contest with as much controversy about the popular versus electoral votes as the Gore-Bush race in 2000. The Hayes recipe fits the holiday theme, as both corn and jalapeno peppers are plants native to the Americas.

The soup, a spicy cousin to New England corn chowder, can be served warm, at room temperature, or chilled (if you do the latter, add a bit more salt and pepper). It makes a good appetizer at any kind of gathering, including a picnic or cook-out. Serve lemonade, too, to honor First Lady Lucy Webb Hayes, nicknamed “Lemonade Lucy” because of the official ban on wine and liquor at White House gatherings during the (perhaps too) reform-minded Hayes presidency. 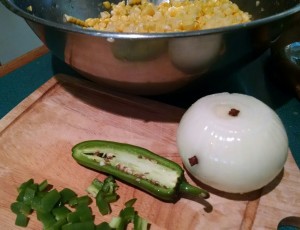 I am named after my great-grandmother, who only prepared two dishes, according to anyone who remembers. Somehow I ended up with a cooking gene that I brought with me from Richmond, Virginia to my current home in Boston, Massachusetts. I have worked as a journalist and published three cookbooks plus a memoir and a novel. This blog gives me a chance to share family recipes and other American recipes with a past.
View all posts by heritagerecipebox →
This entry was posted in cookbooks, Food, history and tagged 1870s, Capitol Hill Cooks, chile peppers, chowder, corn, cream, Homes for Our Troops, July 4, Lucy Webb Hayes, milk, Rutherford B. Hayes, soup, U.S. Presidents. Bookmark the permalink.