A Cider Cake Fit For a Governor

Posted on November 15, 2015 by heritagerecipebox 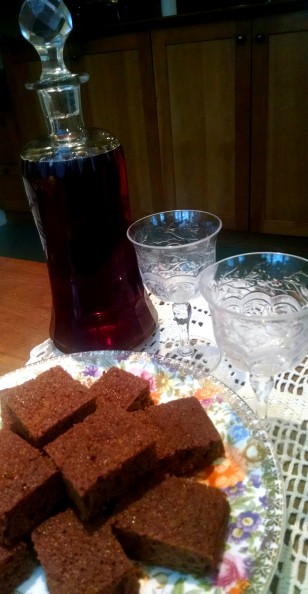 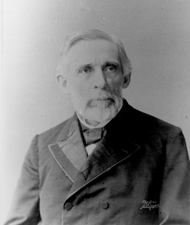 In 1850s America, anyone who wrote down recipes often measured in wine glasses and handfuls, if they measured at all. That’s true in a handwritten book kept by Sara Adelia Boutwell, wife of Massachusetts Governor George Boutwell. He was elected in 1851, the same year that he built his house at 172 Main Street in Groton, a town about 50 miles northwest of Boston. He and his family lived a few doors away from the store that he continued to run while he was governing the state. Governor Boutwell went on to a distinguished career in national politics, serving in the U.S. Congress (he helped conduct impeachment proceedings against President Andrew Johnson) and as Secretary of the Treasury. 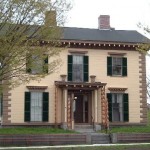 The Groton Historical Society, which now owns and operates the Boutwell House, recently shared a page of the recipe book with me because I’m presenting a talk, “From Ginger to Jell-O: An Unexpected Christmas History,” on December 1. To set the stage, I made a mid-nineteenth century recipe from Mrs. Boutwell.

After deciphering her script and interpreting what to do with 1 tumbler cider, “a piece” of butter and batter “mixed thin,” I came up with an adaptation. With its reliance on apple cider and molasses, the recipe reflects ingredients that were widely available in New England. Saleratus, an early form of baking soda, was a fairly new ingredient in the nineteenth century. When mixed with something acidic, like vinegar or citrus, it lightened up cake batters. Before then, cooks used pearl ash (made from the ashes in their fireplaces), folded whipped egg whites into their batters – or just ate heavy cake. This dark, moist cider cake from Mrs. Boutwell’s recipe goes well with tea or sherry, depending on your mood. 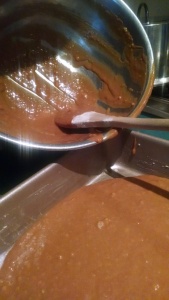 Note: The original recipe called for sweet milk, but I wanted a more acidic ingredient to help the baking soda work effectively. To make your own sour milk, add a tablespoon of lemon juice or vinegar to 1 cup of milk, stir, and let it sit until bubbles form on top, about 5 minutes.

I am named after my great-grandmother, who only prepared two dishes, according to anyone who remembers. Somehow I ended up with a cooking gene that I brought with me from Richmond, Virginia to my current home in Boston, Massachusetts. I have worked as a journalist and published three cookbooks plus a memoir and a novel. This blog gives me a chance to share family recipes and other American recipes with a past.
View all posts by heritagerecipebox →
This entry was posted in cookbooks, Food, history and tagged 1850s, 19th century, apple cider, apple cider cake, Boutwell House, cake, cider, George Boutwell, ginger, Massachusetts, molasses, Sara Boutwell. Bookmark the permalink.