Havin’ a Fit of Spring Fever 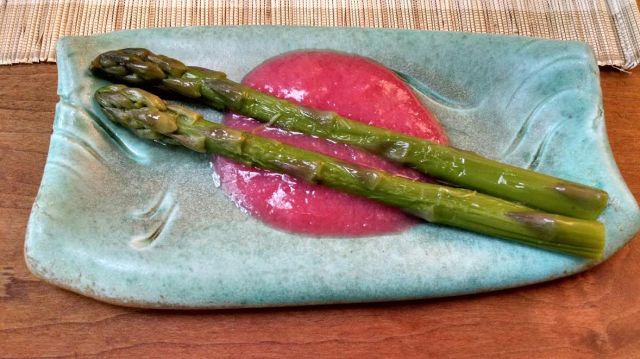 An unruly but quite productive rhubarb plant grows in my yard in Boston, so I’m always looking for ideas beyond my standard strawberry-rhubarb jam. I found this one in Signs of Good Taste by Ann Meade Besenfelder (2000), a book about restaurants in Richmond, Virginia’s historic Fan District, where my grandparents once lived. I spent many evenings grazing the salad bar set up in an old bathtub (yes, really!) at the Strawberry Street Café or downing after-work drinks at Joe’s Inn, two restaurants in the book and still in business. I somehow missed Helen’s, which opened in 1935 and is also still in business, but that didn’t stop me from trying its novel rhubarb preparation.

The complete recipe is titled “Seared American Foie Gras Havin’ A Fit of Spring Fever with Rhubarb-Ginger Coulis, Grilled Vidalia Onions, and Asparagus.” All sounded good, but there was no time to source and shop for foie gras, nor to fire up the grill. I chose just two of the components – coulis and asparagus (which I steamed), and I wasn’t disappointed. The slightly tangy coulis offset the grassy asparagus, and the colors complemented each other well, too. Not havin’ a fit, but havin’ a second helping! And a restaurant to try next time I’m in Richmond.

I am named after my great-grandmother, who only prepared two dishes, according to anyone who remembers. Somehow I ended up with a cooking gene that I brought with me from Richmond, Virginia to my current home in Boston, Massachusetts. I have worked as a journalist and published three cookbooks plus a memoir and a novel. This blog gives me a chance to share family recipes and other American recipes with a past.
View all posts by heritagerecipebox →
This entry was posted in cookbooks, Food, history, History, memoir and tagged 2000, asparagus, Fan District, ginger, Helen's Restaurant, Joe's Inn, rhubarb, Richmond, Signs of Good Taste, spring, Strawberry Street Cafe, Vidalia onion, Virginia. Bookmark the permalink.