Posted on August 7, 2016 by heritagerecipebox 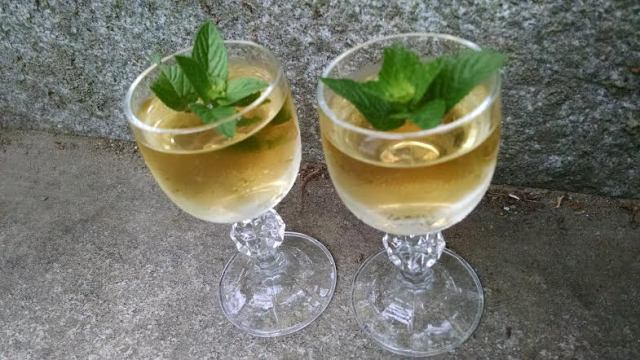 By this time of the summer, mint threatens to overrun my garden. The sprigs that I welcomed when they poked up through the icy soil now crowd my rosemary and parsley. What better way to thin them than to pick them for a recipe?Tired of mojitos and iced tea, I went back to the 19th century for inspiration. Early American Beverages by John Hull Brown (C.E. Tuttle, 1966) gives detailed directions for libations starting in colonial times. This mint cordial comes from the Virginia Housewife (1856 edition) by Mary Randolph, who in the early 19th century ran a boarding house in Richmond. The original calls for a quart of brandy but I cut the quantity in half. The mint infusion worked so effectively that the first sip tasted like mouthwash! The flavor improved after I chilled it. Adjust the quantity of water and sugar to your taste and use up even more mint for the garnish.

I am named after my great-grandmother, who only prepared two dishes, according to anyone who remembers. Somehow I ended up with a cooking gene that I brought with me from Richmond, Virginia to my current home in Boston, Massachusetts. I have worked as a journalist and published three cookbooks plus a memoir and a novel. This blog gives me a chance to share family recipes and other American recipes with a past.
View all posts by heritagerecipebox →
This entry was posted in cocktails, cookbooks, Food, history, History and tagged 1850s, brandy, cognac, Early American Beverages, Mary Randolph, mint, Richmond, Virginia. Bookmark the permalink.